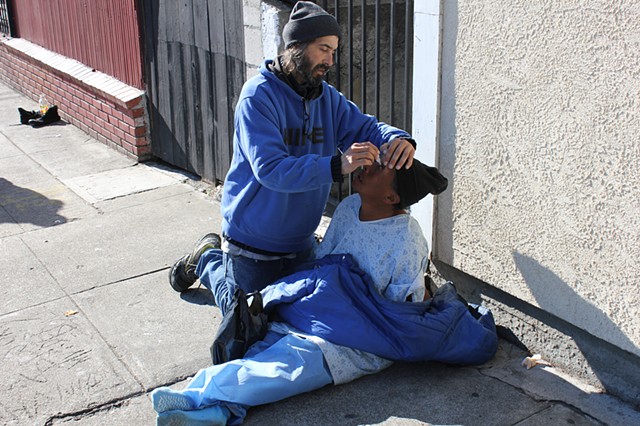 Delphine was dying on the streets with stage 4 kidney disease and glaucoma. However, through our outreach, we re-connected her to her family, got her off the streets, and administer medication to her daily. As a result, the doctors at the East Bay Nephrology Medical Group in Berkeley have pleasantly, and with much surprise, announced that her physical condition has improved so much, that she is actually no longer in mortal danger.

We've had 40 years of the Reagan/Republican revolution, and the homeless populations across the country clearly illustrate its success.

The Rand Corporation did a study recently that determined in the last 40 years fifty trillion dollars of wealth has been transferred from the bottom 90% of the low income and middle class to the top one tenth of one percent. If you account for inflation wages are the same as in 1968, but the top .1% are $50 trillion richer; wage theft. No wonder the unhoused population continues to increase exponentially.

Noam Chomsky has described the Republican party as "the most dangerous organization in human history", for among other things, their unanimous global warming denial, and their shift towards fascism, and authoritarianism (e.g. CPAC, and Tucker Carlson's promotion of Viktor Orban's Hungary).